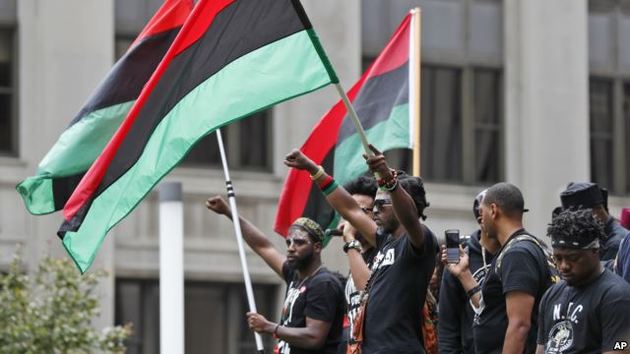 As he barreled his way toward the Republican presidential nomination, Donald Trump offended virtually every group of people imaginable -- from Muslims to women to disabled people to African-Americans.

It seems nearly all of those groups, and many others, are coming to Cleveland, Ohio, this week to hold protests at the Republican National Convention, which is expected to serve as Trump's coronation as the party's presidential nominee.

There will also be a sizable contingency of Trump supporters. The presence of both cohorts has many fearing there will be a continuation of the clashes that have regularly broken out at Trump events across the country.

Here is a list of some of the groups planning to attend the RNC:

The Coalition to Stop Trump and March on the RNC is an alliance of more than 40 groups that will be holding a rally Monday to protest "the bigot Trump and the Republican agenda." The coalition includes labor unions, student groups, Muslim organizations, immigrant rights groups and anti-war groups. A spokesman for the organization told VOA he expects a "few thousand" to attend.

Stand Together Against Trump was started by a group of young Cleveland-area professionals, mostly in the medical field, who will hold "peaceful and positive" protests against the Republican candidate and his campaign of "fear, racism, misogyny and xenophobia." They'll hold protests Monday and Tuesday, but it's not clear how big the events will be.

If there's a big political event in the U.S., you can be sure Code Pink will be there. The feminist anti-war organization is known for sneaking into events and causing high-profile disruptions. The group has repeatedly interrupted Trump campaign events. While it hasn't announced an organized convention presence yet, the group has received a protest permit, and it's almost certain they'll show up.

Black Lives Matter is a largely organic network of groups that protest police violence and racism against African-Americans. It is unclear how big of a presence BLM will have in Cleveland, but local organizers say they are planning several protests. Local Black Lives Matter branches have organized frequent protests in Cleveland, especially after the 2014 police killing of a 12-year-old African-American boy who was shot while playing with a toy gun in a park.

The New Black Panther Party, a black nationalist group, drew headlines earlier this week after its leader said members would take advantage of Ohio's gun laws that allow open carry of firearms outside the convention, but he later retracted that statement. The group is modeled after, but not associated with, the now-defunct Black Panthers, who frequently clashed with police in the 1960s and '70s.

The Panthers are one of several black power groups attending a four-day event in Cleveland called the National Convention of the Oppressed. The event will feature several prominent national civil rights leaders and intellectuals, including Cornel West and Marc Lamont Hill. The group has several events planned, including a Saturday "National March and Rally Against Racism, Injustice and White Supremacy."

Mijente is an adaptation of a Spanish phrase meaning "my people." The group is rallying under that name to build a massive barrier of fabric and other material to "wall off Donald Trump's hate and racism." The wall is in response to Trump's "insults, threats and his promises of mass deportation and building a border wall to separate neighbors," the group says.

Citizens for Trump and the America First Movement are working with a network of pro-Trump groups to hold a parade and rally on Monday to support the likely Republican nominee. Among the high-profile speakers is radio host Alex Jones, who the Southern Poverty Law Centers calls the "most prolific conspiracy theorist in contemporary America." Also speaking will be Roger Stone, a longtime Trump ally and edgy political operative who has warned of a "revolution" if Trump is denied the nomination.

Oath Keepers, a group composed mostly of former members of the military and police, say they will carry weapons at the convention. The group says it aims to "defend the Constitution against all enemies, foreign and domestic." Its members have shown up at recent Black Lives Matter protests, often wearing bulletproof vests and camouflage, and carrying assault rifles.

White supremacists have become emboldened by Trump's candidacy, and many have told VOA they plan on attending the Republican convention. But it is unclear how much of a collective presence there will be, since an alliance of white nationalists recently backed down on their threat to "protect Trump supporters" at the convention.

Anarchist and anti-fascist groups often make appearances at events hosted or attended by white supremacist groups, and the two sides occasionally engage in clashes. Tensions between anti-fascists and white supremacists spiked last month, after the two sides engaged in heavy clashes at a protest in Sacramento. The anti-fascist movement is mostly organic, organizes offline, and doesn't usually publicly announce its presence ahead of time, so it's unclear how big of a presence it will have at the convention.

Westboro Baptist Church is a small, anti-gay fundamentalist Christian group from Kansas. It's mostly composed of a single family and their friends, but it frequently makes big headlines with its shocking, over-the-top protests at military funerals and other high-profile events. The group has received a permit for a demonstration and also plans to use the "speakers platform" in downtown Cleveland.

Nuns on the Bus is a group of almost 20 Catholic activists who are stopping in Cleveland as part of their countrywide tour of the country. The nuns are promoting a "more inclusive America" and protesting wealth inequality. At the convention, they'll be handing out lemonade and asking passersby about what worries them this election cycle.