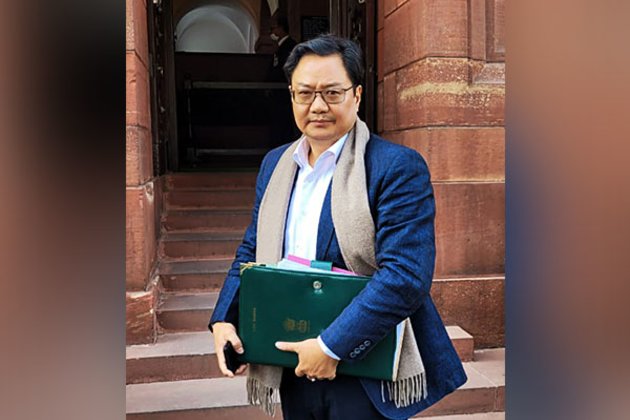 New Delhi [India], January 28 (ANI): Union Minister of Law and Justice Kiren Rijiju on Friday countered former Vice President Hamid Ansari's latest controversial statement on the atmosphere of intolerance and insecurity for Muslims in the country and said that before 2014, communal riots and violence were regular, but India is more peaceful now.

Taking to the micro-blogging platform, Rijiju said, "Some isolated incidents do take place at an individual-community level, but Indian culture is always inclusive. Prime Minister Narendra Modi's mantra is 'Sabka-Sath Sabka-Vikas Sabka- Vishwas Sabka-Prayas'.""What Hamid Ansari Ji said is wrong. I belong to a minority community and I can proudly say that India is the safest nation," he added.

The Law and Justice Minister also added that the minorities facing trouble in any of India's neighboring countries prefer to seek refuge in India because India is safe. "Let's be grateful to our great nation," he said.

Addressing the Indian American Muslim Council program, Ansari had said, "Hindu nationalism is a matter of concern. People are being divided on religious lines in the country. Controversy is being created among the people regarding nationality.""Especially people of a particular religion are being instigated. Intolerance is being fueled and an atmosphere of insecurity is being created in the country," he had added.

Ansari has faced political backlash for this statement. (ANI)