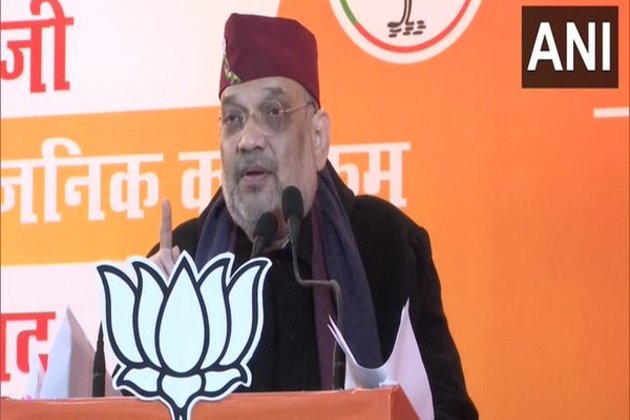 Rudraprayag (Uttarakhand) [India], January 28 (ANI): Union Home Minister Amit Shah on Friday hit out at the Congress party and said that the people of Uttarakhand have not forgotten who ordered opening fire on youth demanding a separate state at Rampur Tiraha.

While virtually addressing women, scheduled caste people and six assembly constituency workers in Rudraprayag, the Home Minister said, "When I came to Uttarakhand 5 years ago, I told the people of Devbhoomi that if we are given a government of full majority by the people of Veerbhoomi, then we have a promise that we will do the work which has not been done in 70 years in five years."He said that for years the people of Uttarakhand struggled for the creation of the state and suffered the oppression of the Congress.

"Who can forget the incident of Rampur Tirahe, when Congress fired at the youth of Uttarakhand who were demanding their rights? Congress never supported the establishment of the Uttarakhand state. When Atal ji's government came, he created Uttarakhand and now Prime Minister Narendra Modi is doing the work of handling the state. We fulfilled all the promises we made five years ago."He further said Chardham is the centre of reverence of the whole country and the world in Uttarakhand. Development here is our priority, he added.

"There will not be any part of the country from where people will not come to Chardham. There will be no such end in the country, in whose security the soldiers of Uttarakhand are not deployed," he added.

He further said that over 700 fast track courts have been formed for immediate justice to women.

"For Muslim women whose husbands would leave them after marriage by saying 'Talaq, Talaq, Talaq' PM Modi got the Triple Talaq law abolished...Over 700 fast track courts have been formed for immediate justice to women," said Shah.

Polls to elect the 70-member Uttarakhand Legislative Assembly are scheduled to be held on February 14. The counting of votes will take place on March 10. (ANI)