Blues aim to stay hot at home when Jets fly in 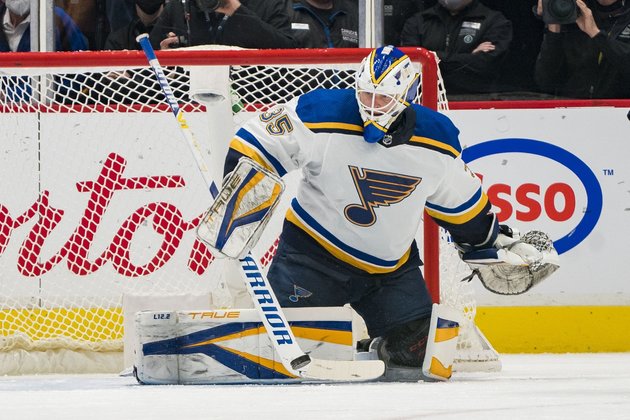 The St. Louis Blues will try to maintain their home-ice dominance when they host the slumping Winnipeg Jets on Saturday.

The Blues handled the Calgary Flames 5-1 Thursday to run their record at Enterprise Center to 14-1-1 since Nov. 18. That victory was a huge rebound from St. Louis' 7-1 loss atCalgary on Monday night.

"You don't like losing like that and you always kind of put those losses in the back of your mind against the teams that beat you that bad," Blues forward Brayden Schenn said. "Just happened to be three days later that we get another chance at it, so you don't take those losses lightly. They're gonna happen over an 82-game season and it's just more of a more of a wake-up call that you got to be ready to play games, which we weren't in Calgary."

Meanwhile the Jets are winless (0-4-2) in their last six games. They were outscored 10-4 in losses to Florida and Vancouver at home in their last two games.

The Blues have been riding the hot goaltending of Ville Husso, who supplanted starter Jordan Binnington and went 6-0-0 with a 1.11 goals-against average and .965 save percentage in his last seven games (six starts).

"He's been huge for us, especially as of late," Blues forward Brandon Saad said. "I haven't seen a better goalie in the League lately. He's been great back there. I think when you have that, you're going to have confidence. Obviously, we don't want to give up too many chances, but when he can do that for us, it helps us transition."

After the loss at Calgary, Blues coach Craig Berube shuffled his forward lines again and flanked Schenn with wingers Saad and David Perron. Saad scored twice and Schenn had a goal and an assist, giving him eight points in five games since emerging from COVID-19 protocols.

"Obviously it's been a little frustrating first half at times, but I hope it's all away now and I can just be a piece of this team," Schenn said. "We're so deep up front, we're so deep as a team and we feel like anyone can play with anyone in here. Everyone's got to take a little bit less and buy into the team in order for everyone to have success."

The Jets' struggles have been compounded by the loss of key winger Nikolaj Ehlers to a knee injury and the absence of defenseman Josh Morrissey due to COVID-19 protocols.

"I don't think it's frustration. I think it's disappointment," Lowry said. "These guys are great pros, they take a lot of pride in their game. Obviously as a group we're disappointed in the results right now."