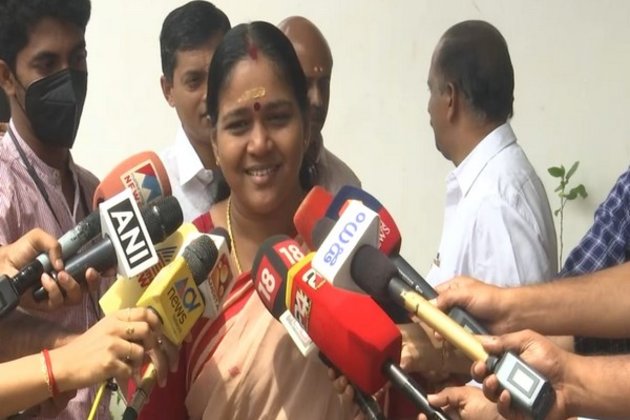 Kochi (Kerala) [India], May 13 (ANI): Bharatiya Janata Party state Vice President Shobha Surendran on Friday alleged that Chief Minister Pinarayi Vijayan is trying to appease the fundamentalists by keeping silent on the action of the Kerala cleric who scolded the organisers of a students' felicitation ceremony for inviting a girl student on stage.

Shobha said that people were expecting a statement from the CM on the action of the cleric, but the CM chose to keep quiet on the matter despite the reactions of the Governor and others.

After the video went viral on social media, the Samastha leader was heavily criticised. Kerala governor Arif Mohammed Khan on Wednesday reacted to the video and termed the incident unfortunate.

"Sad to know that a young talented girl was humiliated on stage in Malappuram district while receiving a well-deserved award simply because she was born into a Muslim family," read a statement on the official Twitter handle of the Governor.

Governor said that this is yet another example of how Muslim clerics continue to push hard Muslim women into seclusion and suppress their personalities in total defiance of Qur'anic commands and provisions of the Constitution.

"Holy Qur'an says- "And women shall have rights similar to the rights against them according to what is fair and reasonable, but men have an added degree of responsibility towards them -2.228": said the Governor, in a thread of tweets.

A video of the incident went viral on social media in which the senior leader of Samastha Kerala Jem-iyyathul Ulama, MT Abdulla Musaliyar was seen berating the organisers of a students' felicitation ceremony for inviting a girl student on stage to receive an award.

The senior leader asked the organisers whether they don't know the Samastha rules and angrily shouted at them for calling her onto the stage. Samastha, a Muslim scholarly body was felicitating students in Malappuram.

"Who invited a tenth standard student here on the stage? If you do this again, I will show you. Do not call such girls over here. Don't you know Samastha's rules? Invite the parents here. Were you the one who called (her)? Don't do such things while we are sitting here. Won't this come in photos?," the senior leader Musaliyar asked angrily. (ANI)