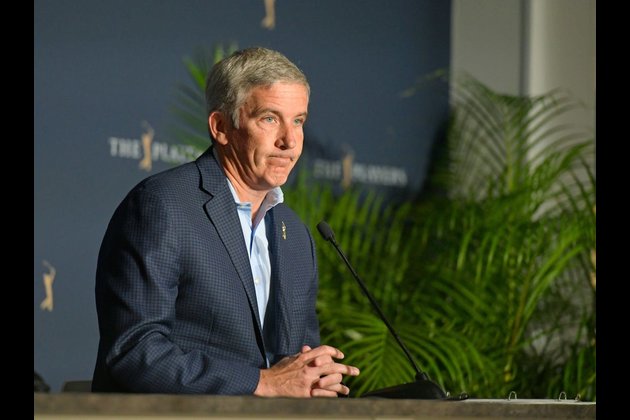 The PGA Tour is laying out plans to increase purses at several marquee events and revamp its schedule in an effort to compete with the burgeoning LIV Golf Invitational Series, multiple outlets reported Tuesday.

PGA Tour commissioner Jay Monahan unveiled these plans at a players meeting at TPC River Highlands, the site of this week's Travelers Championship.

Per the reports, the PGA Tour wants to increase the purses at limited-field events in the regular season to at least $20 million and establish a new, lucrative fall schedule for the top 50 finishers in the FedEx Cup standings. Those new tournaments would rotate sites around the world and -- like LIV's tournaments -- have no cut.

The tour is likely to do away with the "wraparound" schedule from October through September that it introduced in 2013-14, returning instead to a calendar-year schedule. ESPN reported that top players on tour have expressed that there is no real offseason in the current format, with FedEx Cup points on the line in several events in October and November.

Current events that could see a hefty purse increase include The Players Championship, the Genesis Invitational, the Arnold Palmer Invitational, the Memorial and the Tournament of Champions. At present, the Players is the largest purse on tour, reaching $20 million for the first time last March.

The LIV series, backed by the Saudi Public Investment Fund, offers $25 million purses in its events and is said to have offered nine-figure advances to woo top players like Dustin Johnson and Bryson DeChambeau.

Monahan is scheduled to speak with the media at TPC River Highlands on Wednesday, with the tournament beginning Thursday.