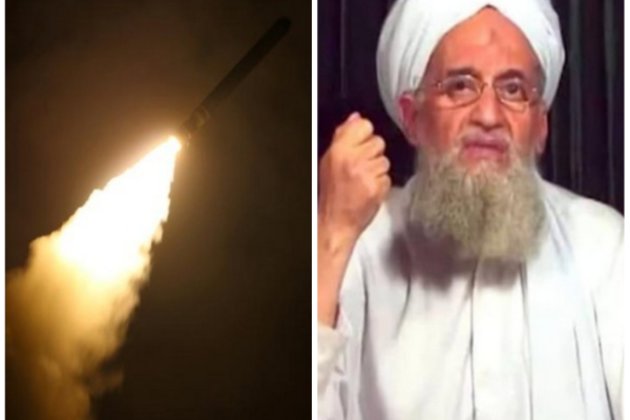 New Delhi [India], August 2 (ANI): The Hellfire R9X missile, an anti-tank weapon used by the Central Intelligence Agency (CIA) in the recent killing of Al Qaeda chief and key plotter of the 9/11 terrorist attack, Ayman al Zawahiri has been used to kill a few high profile terrorists before being used to eliminate Zawahiri on July 31 in Afghanistan, a media report said.

Hellfire R9X missile is basically a modified version of the renowned Hellfire missile which was an anti-tank weapon developed in the 1980s and was later modified numerous times, especially after the 9/11 attacks, to target individuals.

The missile is designed in a way that it can shove more than 100 pounds of metal in order to kill its target, be it a car or building.

The most lethal aspect of the R9X is the halo of six long blades which are packed inside that deploy through the skin of the missile moments before impact to ensure that it shreds anything in its tracks.

As per several media reports, the reason behind the development of the Hellfire R9X missile was to minimize civilian deaths and it came into existence when former president Barack Obama was in office. Notably, the weapon was also developed to eliminate doubts regarding the structural stoutness of a building such as mud and thatch huts which terrorists usually use as a hideout.

Before turning Al-Qaeda leader Ayman al-Zawahiri into ashes, the Hellfire R9X missile has been used in other operations as well. In January 2019, the weapon was used to kill Jamal al-Badawi whereas Ahmad Hasan Abu Khayr al-Masri was killed in February 2017.

Al-Badawi was in Yemen when the Pentagon used the R9X missile to kill him and he was a part of the team led by Ayman al-Zawahiri that was behind the bombing of the USS Cole, media reports said.

Zawahiri took over the leadership of Al-Qaeda after the US Forces hunted down Osama bin Laden in Jalalabad of Pakistan.

He served three years as a surgeon in the Egyptian Army, but his journey from an eye surgeon to becoming a most wanted global terrorist started after he met Laden in 1986, and joined Laden as his personal advisor and physician. In 1993, he took over the leadership of Islamic Jihad in Egypt and was found to be involved in the killing of over 1,200 Egyptians.

Years later, Zawahiri became number two on the list of "most wanted terrorists" announced by the US government in 2001. Notably, in 1998, Zawahiri finally merged the Egyptian Islamic Jihad with Al-Qaeda.

Zawahiri emerged as a prominent speaker of Al-Qaeda in recent years after he appeared in 16 videos and audiotapes in 2007, four times as many as Bin Laden, as the group tried to radicalise and recruit Muslims around the world. His whereabouts were a mystery for several years, but he was believed to be hiding along the border between Pakistan and Afghanistan.

In January 2006, the US had earlier tried to kill Zawahiri in a missile strike near Pakistan's border with Afghanistan. The attack killed four al-Qaeda members, but Zawahiri survived and appeared on video two weeks later, warning US President George W Bush that neither he nor "all the powers on earth" could bring his death "one second closer".

Zawahiri's targeted killing comes a year after the US military withdrawal from Afghanistan and the Taliban's takeover of the country.

The US President said that justice has been delivered, adding, "No matter how long it takes, no matter where you hide, if you are a threat to our people, the US will find you and take you out."(ANI)