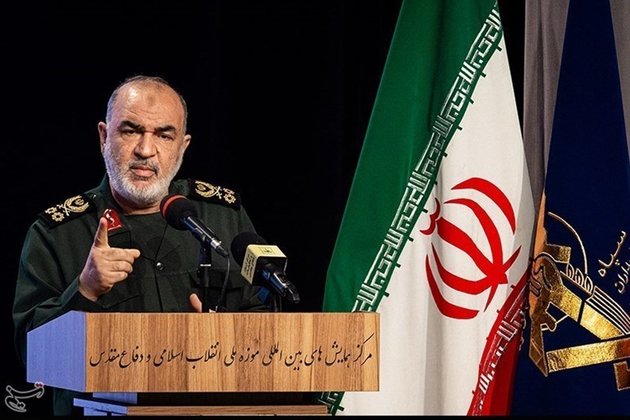 TEHRAN (Tasnim) - Not a single case of martyrdom of the resistance front forces will remain unanswered, the Islamic Revolution Guards Corps (IRGC) commander said, warning the Zionist regime that it has to pay the price for every martyr at the proper time and place.

In remarks on Thursday, Major General Hossein Salami pointed to plans for Iran's retaliatory response to the martyrdom of a serviceman of the IRGC Aerospace Force at the hands of the Zionist regime's elements after a roadside bomb blast near Damascus.

The IRGC said on Tuesday that colonel Davoud Jafari, who was an adviser of the IRGC Aerospace Force in Syria, was martyred on the morning of November 21 after a roadside bomb explosion near Damascus at the hands of the Zionist regime's elements.

Offering his condolences to Leader of the Islamic Revolution Ayatollah Seyed Ali Khamenei and the Iranian nation on the martyrdom of colonel Jafari, the IRGC commander said, "If you take a look at the occupied Palestine arena, you'd see that the resistance front, which is an integrated front like a single body, is taking revenge for the martyrs against the Zionists on a daily basis."

He said that every single martyrdom would cause the resistance front to exact separate revenge, stressing that every case of revenge would be taken at the appropriate time and location.

"The levels of those measures (revenge on Israel) will be different and they will be taken in due time, God willing," the general added.

He also reminded the enemies of Iran that none of the cases of martyrdom of the resistance forces will go unanswered.

The IRGC public relations department had already announced that the "fake and criminal Zionist regime" will undoubtedly receive a response for the crime of killing the IRGC adviser in Syria.