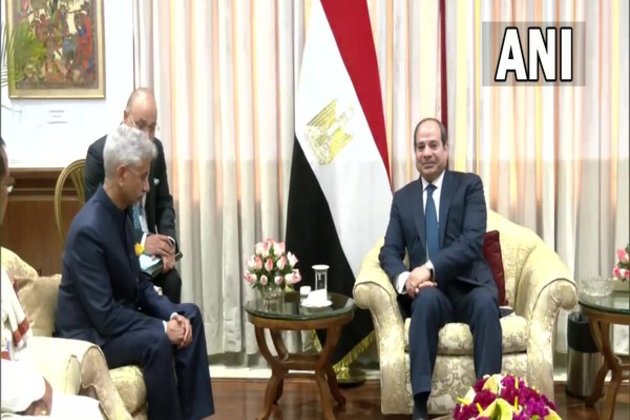 The Egyptian President arrived in New Delhi on January 24.

Egyptian President Abdel Fattah El-Sisi on Wednesday congratulated the Indians for the 74th Republic Day and called it a "great privilege" to be chief guest on such glorious national day. He said that the ties between India and Egypt have been characterised by balance and stability.

"I reiterate my congratulations to the Indian nation, government and people for this great day. It is a great privilege to be a guest of honour and participate in the glorious national day," Abdel Fattah El-Sisi said at the Rashtrapati Bhavan in Delhi.

"The relations between Egypt and India have been characterised by balance and stability. We have only seen constructive development. We have been all along evolving very positively," he said further. The Egyptian President also expressed his desire to take the bilateral relations between the two countries to a new horizon," he further said.

Abdel Fattah El-Sisi said that he expects that both nations take the bilateral level to new horizon. He said, "I expect through this visit that we take our bilateral level to a whole new horizon, where we can reach the relationship and partnership between the two countries at all levels. I look with great esteem to the sustainable development experience of India."For his official visit to India from January 24-27, El-Sisi is accompanied by a high-level delegation, including five ministers and senior officials. It is the first time that the President of Egypt has been invited as chief guest on India's Republic Day.

Taking to his Twitter handle, PM Modi on Tuesday said, "Warm welcome to India, President Abdel Fattah el-Sisi. Your historic visit to India as Chief Guest for our Republic Day celebrations is a matter of immense happiness for all Indians. Look forward to our discussions tomorrow."According to the statement released by the Ministry of External Affairs, Today evening, President Droupadi Murmu will host a state banquet in honour of the visiting dignitary.

President El-Sisi will attend the "at home" reception by President Murmu at Rashtrapati Bhavan. He will also hold a meeting with Vice President Jagdeep Dhankhar. He will interact with the business community in India.

On January 26, El-Sisi will witness the Republic Day Parade as the chief guest. A military contingent of the Egyptian Army will march on the Kartavya Path along with other contingents. Sisi will return to Cairo on January 27.

Notably, India and Egypt are celebrating 75 years of establishment of diplomatic relations this year. India has also invited Egypt as a 'guest country" during its G20 Presidency. (ANI)